I would like to show you today some of the best looks created by Canadian menswear designer Christopher Bates. These looks are part of different collections he launched between 2009 and 2012. Some of the outfits are rocked by the designer himself. My absolute favorite is the white tuxedo. 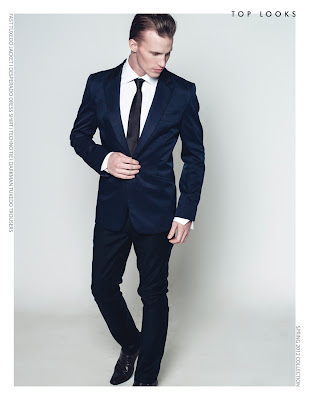 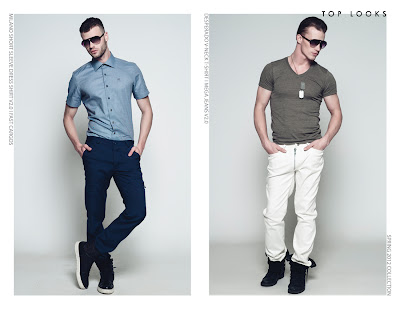 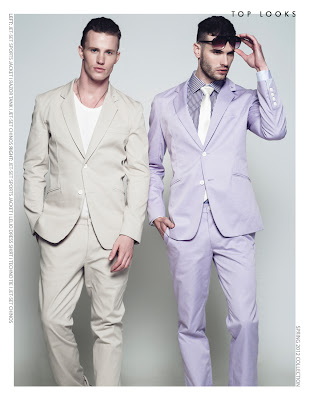 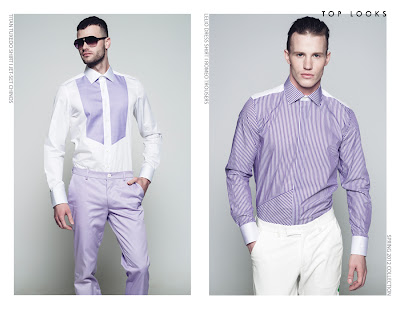 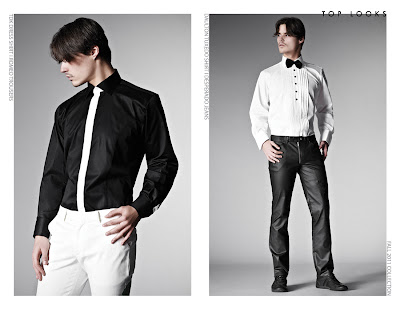 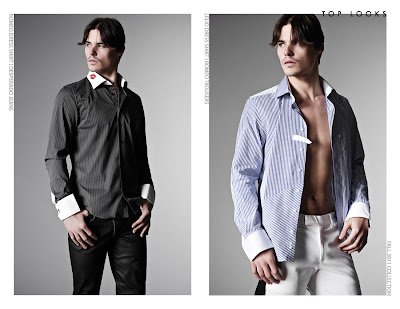 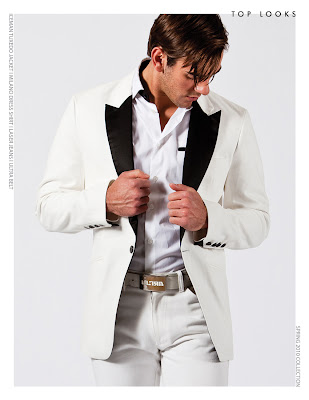 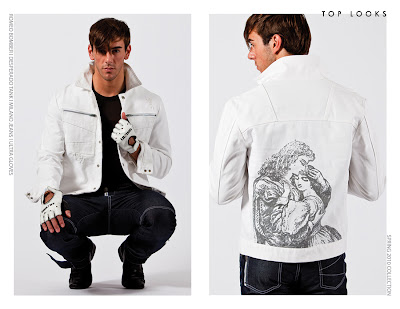 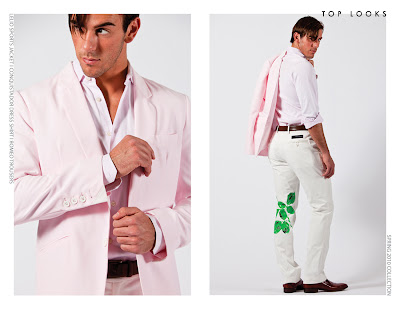 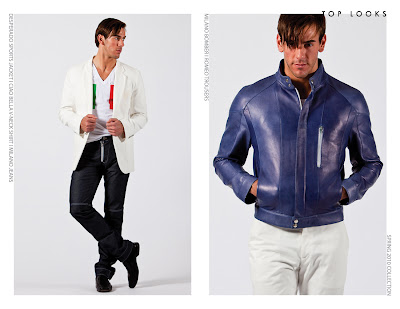 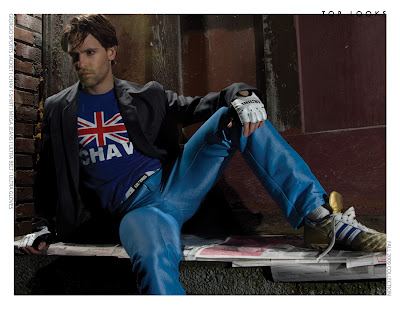 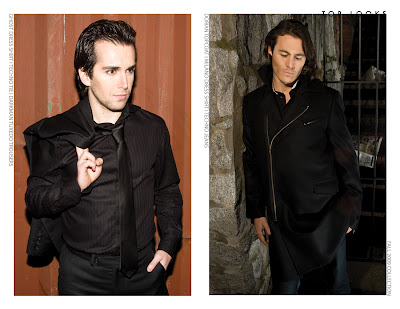 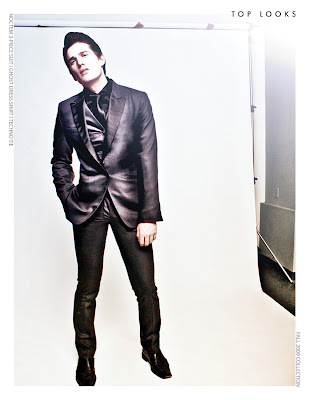 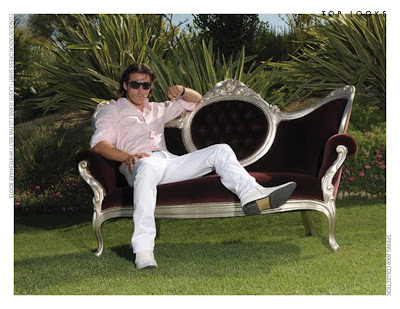 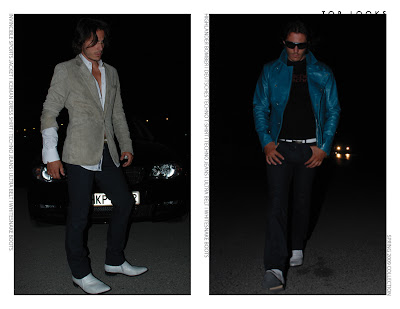 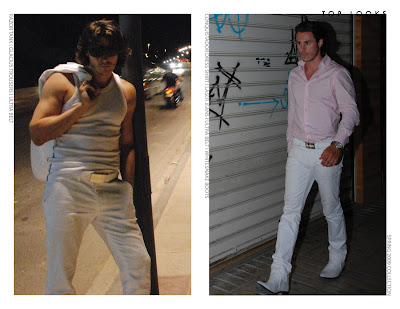 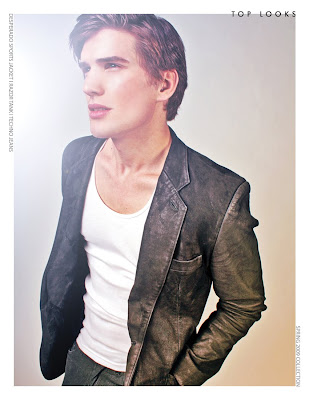 Christopher Bates is one of the leading menswear designers in Canada. Born and raised in Vancouver, he studied fashion design in Milan. Currently, his fashion brand is established in Toronto, retailing at Gotstyle menswear store, among other fine clothing stores.

One of the highlights of his fashion career is his being among the 8 finalists at Mercedes Benz Start Up Program, a prestigious fashion competition for emerging designers, founded in Canada in 2011. The program is sponsored by Mercedes Benz Canada Inc. and is produced in association with Fashion Design Council of Canada (FDCC). This year’s Semifinal of Mercedes Benz Start Up Program took place in Ottawa, in August, and the Final of this competition took place in Toronto, during Word MasterCard Toronto Fashion Week (October 22-26, 2012).

He is also said to be The Most Eligible Bachelor of Toronto, according to Eligible Magazine.

Christopher Bates kindly agreed to meet with me for an interview earlier this week, and it’s my great pleasure to share it with you today.

Ladies and Gentlemen, I give you Christopher Bates.

Victoria West: Please tell us a bit about your brand and its history.

Christopher Bates: I’ll start at the beginning – I studied fashion design in Milan, at Instituto Marangoni, in 2006-2007. Then I moved back to Vancouver to start my line, in 2008. I moved to Toronto in 2010 to grow the business, I’ve been here just over 2 years now, and it’s really starting to catch on.

VW: How would you describe the man who wears Christopher Bates designs?

CB: It’s interesting – when I launched, I was after the 25 to 35-year old crowd; but I’ve actually found the guys who were 35 to 55 range. So it’s the middle age, career oriented guys who appreciate designer fashion.

VW: You were one of the finalists of Mercedes Benz Start Up fashion competition, what do you think being a part of this contest will bring to your fashion career?

CB: Mercedes Benz Start Up has been great. We had a chance to meet with a lot of really great industry professionals. They have been mentoring me over the last few months and they are going to continue mentoring me moving forward. That will help me a lot, their advice is really invaluable for all aspects of my business development. Also, we had a chance to do a fashion show in Ottawa, as part of the original Final, so that was the first time when I’ve been to Ottawa and it got me some exposure in that market. And of course, the fashion show at Toronto Fashion Week that was sponsored by Mercedes – that was a fantastic opportunity that I wouldn’t have had, if it wasn’t for the Mercedes Benz Start Up Program. All of that has brought a lot of attention to my brand and helped raise my profile, generated lots of press, and now more and more people want the product. That is really the bottom line – that it’s helping with the sales, which is fantastic.

VW: Where do you retail, besides Gotstyle?

CB: In Toronto it’s Gotstyle, in Waterloo I’m at Channer’s, and in Quebec City I’m at Boutique Novo.

VW: Do you intend to show your collections at Toronto Fashion Week in the future?

CB: I do. I’m working on a plan to potentially show in this spring, I would like to. I think it’s a great platform, it gets a lot of attention, a lot of press; and I also just really enjoy it. I want to share my work with as many people as possible and that’s the best stage in Canada.

VW: Do you know if you’re going to do that at the next Toronto Fashion Week yet?

CB: I don’t know yet. It can be a very costly endeavor, I would want to use the main stage, it has to make sense for my business, and it’s really a marketing exercise ultimately. Do I have that much to put into my marketing budget at that time? I don’t know yet. But I’d like to find a way to do it.

VW: Where do you find your inspiration?

CB: Just life, just living life. I’m really into lots of different things – I love automotive, I love homewares, I love graphic design and typography, I’m into architecture, movies, music. And traveling of course, it’s really big. By just living my life, I find certain things that really inspire me and start to generate ideas in my head for clothing – that’s sort of how my mind works.

VW: Do you work on any project right now?

CB: Yes, I do. Right now, I’m working on potentially an order for 600 dress shirts, which is really exciting. I’m also shooting my lookbook this week, which will be my Spring 2013 catalogue that I’ll be using to then start to pitch more stores on picking up my line for Spring 2013, so I’ll be doing a little sales push. I’m also working on a presentation version of my business plan, so I’m going to be meeting with investors. Once that’s complete, I’ll have to raise financing and invest to grow the business. I’m also working on my new collection for next fall. Right now, it’s just in the gestation period, I’m working on the designs, but I’ve got to get started pretty soon, in order to be on time for the season. So, I’m very busy.

VW: Fashion collaborations between designers and ready-to-wear brands occur more and more frequently these days. The best example would be H&M. Another example would be Martin Lim, the designers who won Mercedes Benz Start Up Program in 2011, and who just launched a capsule collection in collaboration with Reitmans. Would that be a project of interest for you in the future, would you consider doing such collaborative collections with other fashion houses and brands?

CB: I think it would be premature to say that at this point. There are lots of people I’d like to work with on such a project, but I don’t want to put anybody out by choosing one category. I’d like to do shoes/footwear – this is something that I’m really keen on at the moment, because I think there is a void in the marketplace for contemporary men’s dress shoe. I recently was shopping, I wanted a basic men’s contemporary dress shoe in black, and one in brown. I went to just about every shoe place in downtown Toronto, and there are virtually no options. So I have some ideas for what should be out there for men’s dress shoes, and I want to help design them and make them. Footwear is probably the first thing that I am keen on; but also I’ve designed some eyewear, I’ve also designed homewares. I never really stop designing, so I do want to collaborate, not just with other ready-to-wear clothing manufactures, but also with accessories.

VW: And on a personal note, what is your favorite movie (or movies)?

CB: Ah, that’s a great one. Blade Runner, The Last of the Mohicans and The Count of Monte Cristo are three of my favorites. What I like about these movies is the music, the cinematography, the acting, the directing, and the story – those are the important parts.

VW: What is your favorite movie from the costume perspective?

CB: The new Tron is a good example – I really liked the costumes, very futuristic and modern and cool; visually, that was a really strong movie.

Trained in Italy’s fashion capital Milan at legendary Instituto Marangoni, Toronto-based Christopher Bates is an intrepid designer achieving a meteoric rise in the fashion industry. His eponymous menswear line is gaining traction with retailers, consumers, media, stylists, and celebrities. Bates was featured as one of the top six leading menswear designers in Canada (Sharp Magazine, September 2009). Since launching his brand, he has been selling in leading Canadian boutiques including Toronto’s high-profile Gotstyle Menswear (voted #1 menswear store in Canada by Sharp Magazine, 2012).

The 2012 Mercedes-Benz Start Up Program Final fashion show took place on October 23rd on the main runway at World MasterCard Toronto Fashion Week (October 22-26, 2012). Bates was the only menswear designer in the Final and competed against 7 emerging women’s wear designers from across Canada. The designer will receive additional mentoring from elite fashion professionals moving forward. Bates has lauded the program for helping raise his profile and increase demand for his line. “It’s a fantastic initiative. We had a chance to meet with a lot of really great industry professionals. Their advice is really invaluable for all aspects of my business development.” he says.

His Spring 2013 collection is titled “Dressed To Kill” and was inspired by the heroes and villains of classic 1960’s James Bond films. Focusing on his strongest pieces to date (leather jackets, stylish dress shirts, dressier denims, and contemporary tailored suiting), Bates promises to showcase a dynamic and cohesive collection designed to inspire today’s style-savvy man. Each look will be fully accessorized featuring Italian leather belts, duchess silk ties, and leather-trimmed suspenders. Christopher Bates would like to thank Town Shoes for sponsoring the footwear and Fossil Canada for generously providing Emporio Armani watches.

Bates’ fashion show at Mercedes Benz Start Up Final during Toronto Fashion Week this fall included a “Dressed To Kill” theme song produced by Stereotronique exclusively for his runway show. “Creating the appropriate atmosphere is critical; the music has to complement the clothing and add energy and excitement to the show”, explains the designer.

A sneak preview of the line (select items) hit Gotstyle Menswear on Friday, October 19th, shortly before the big show. The full collection will be in-store early in the New Year. In addition to Gotstyle Menswear in Toronto, Christopher Bates line is available at Channer’s in Waterloo, and Boutique Novo in Quebec City.

Christopher Bates line is for style-conscious individuals who possess a cultivated appreciation of designer fashion. Born and raised in Canada, trained in Milan and inspired by the European lifestyle, Bates’ approach to design is truly global and his line appeals to the growing number of fashionable men in cosmopolitan cities around the world.

His unique style evolves from the following elements: contemporary tailoring, elegant fabrics, clever details, quality construction, a tasteful color palette, and a unique blend of Scandinavian and Italian influences. He designs quality, lifestyle-oriented pieces with a distinctly European flair. Focusing on the smart-casual market, his dashing, urban looks are perfectly suited for evening, weekend and transition wear. All of his pieces are proudly made in Canada from the finest materials imported from Europe. Bates’ ultimate goal is to create a leading international designer fashion brand.