The Carrie Diaries by Candace Bushnell 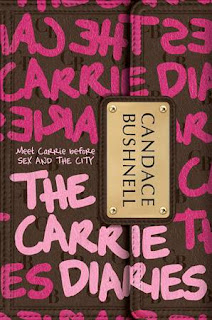 I’ve just read The Carrie Diaries by Candace Bushnell. It was a nice and easy reading. It’s the story of Carrie Bradshaw before Sex and the City. The book focuses on Carrie Bradshaw’s senior year of high school in a small town called Castlebury. As we read the book, we meet Carrie’s family, her friends, her mates from the high school. Then we meet Sebastian Kydd, the new guy from the high school who becomes the most popular guy overnight, the guy wanted by all the girls, the guy Carrie falls in love with instantly. Then she starts going out with him, but is utterly disappointed when she discovers that her best friend Lali steals him from her. Then she gets accepted to Brown college.

But The Carrie Diaries is not only the story of Carrie’s senior year of high school, but also Carrie’s story of becoming a writer. Being a writer is her most cherished dream, and she feels ready to make her way toward a writing career. She applies for a summer writing school, New Age, but gets rejected. But she doesn’t give up. She has already written a few stories which she keeps in her drawer, stories nobody has even seen, but she will go ahead to follow her dream. So she starts writing for the high school newspaper, The Nutmeg, signing her pieces with the mysterious name Pinky Weatherton. Her writings for the paper are sharp and pinpointing, which causes some waves in the school. Nobody knows who Pinky Weatherton is, and some people even assume that the mysterious writer is a guy. Then her dream comes true – she finally gets an invitation to join the New Age summer writing school, and she goes to New York to pursue her dream of becoming a writer.

There are some differences between Carrie Bradshaw created by Candace Bushnell and Carrie Bradshaw created by the writers from Sex and the City the TV show. Carrie from The Carrie Diaries is still virgin in her high school senior year. Even though she dates Sebastian Kydd for months, she doesn’t have sex with him, as she is reluctant to go so far in her relationship and start having sex, as opposed to her friends who have already done so. Although she is madly in love with Sebastian Kydd, she is not sure she should have sex with him. So when she goes to New York after graduating from high school, she is still virgin. In Sex and the City the show however, Carrie admits to Charlotte during season 3 that she had sex for the first time when she was in the 11th grade.

Another difference between Carrie Bradshaw from The Carrie Diaries and Carrie Bradshaw from Sex and the City the TV show is related to her family. In the book she lives with her father and the two sisters, and her mother is deceased. In the TV show, during season 4, she says that her father left her and her mother when she was 5 years old; also, no siblings are ever mentioned in the show.

The end of the book is surprising. Carrie goes to New York to join the summer writing school, but she gets robbed the very first minute she sets foot in New York – someone steals her purse with all her money. She tries to contact George to ask for his help, but she can’t reach him. Then she remembers that one of her friends from home, Donna LaDonna, gave her the number of her cousin from New York. So Carrie finds the phone number in the luggage, and calls this cousin of Donna’s, who appears to be nobody else but Samantha Jones. I have to admit I just love the way the book ends.

A sequel to The Carrie Diaries is expected to be published in 2011. We don’t know too many details about Carrie’s second diary yet, but it wouldn’t surprise me if it was about Carrie Bradshaw’s first years spent in New York. We’ll live and see.
Published by Victoria West la 15:46