Janey Wilcox and Other Stories 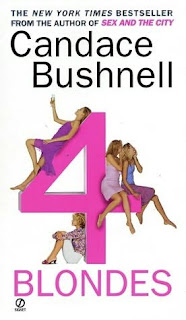 I read two books by Candace Bushnell recently, Four Blondes and Trading Up. As far as Four Blondes is concerned, this is actually the second time I read it; first time I read this book two years ago. As the title suggests, Four Blondes is a book about four blonde women, and each of them has her own story – the book is a 4-in-1 story. The four blondes are the model Janey Wilcox, the columnist Winney Deeke, the socialite Cecelia Kelly Luxenstein and the writer Minky.

Janey Wilcox is a girl who would do anything to get what she wants. When her story starts in Four Blondes, she is not in the greatest place. She has no money, but she wants a lavish lifestyle, and she is constantly looking for a man who would pay for that. She wants to spend every summer in Hamptons, but she cannot afford it by herself, so she starts a “relationship” with a rich man she would spend the summer in Hamptons with. By the end of summer, any of her Hamptons “relationships” would end with no doubt. As long as she doesn’t expect all these men to marry her, she will always have a good summer in Hamptons, and she is willing to put up with men’s humiliations in order to get a summer house in Hamptons. Every time she is asked about it, she says that she just wants a good summer. There was Peter, there was Zack Manners, there was Harold, there was Redmon Richardly, there was Comstock Dibble. None of these “relationships” were fulfilling for Janey of course, but she doesn’t care, as long as she gets what she wants. It’s just sex and summer in Hamptons. At a certain point she wonders why rich people won’t do more for girls like her, for that amount of money would mean nothing to them. But then, as she realizes herself, rich people don’t like to be used. Of course they don’t want it. Who on earth would like to be taken advantage of, rich or poor?

People think of Janey Wilcox as a slut, or even worse, as a whore; but again, she doesn’t care, as long as she gets what she wants. She is convinced that someday she will meet the perfect man she would fall madly in love with, and marry him.

Her own mother is not like any other normal mothers. She is not loving, she is not understanding, she is not supporting. Janey and her mother hate each other. So Janey is determined “to show” her mother (and everybody else who gives her a hard time) that she can do much better in her life than her unsupporting and unloving mother has ever been able to do. Janey thinks her mother is just frustrated and jealous. The only thing her mother ever says to Janey is that she should take care of her beauty and her weight in order to get a rich man and marry him, otherwise she’s doomed. Her mother thinks Janey shouldn’t work, she thinks that beautiful women don’t have to work, that beautiful women should find themselves rich men to provide for them. She keeps bugging her about marriage. No wonder the two of them don’t get along that well.

And then Comstock Dibble, the movie producer, comes along, who is another of her summer “relationships”. He gives her $20,000 to rent her own summer house in Hamptons. This time, Janey is determined “to do something with her life”, so she attempts to write a screenplay for Comstock Dibble. But of course, Comstock Dibble is not different from any other men Janey Wilcox has met. He fucks her up the butt, so she won’t get pregnant. And at the end of the summer, he introduces her his fiancée, and admits they actually try to get pregnant.

In the end, things get better for Janey. She gets a two-million dollar contract from Victoria’s Secret for four years, and a nice new Porsche Boxster convertible. Not bad for a single woman, she thinks. 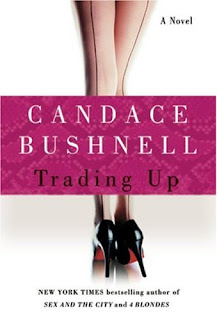 The story of Janey Wilcox goes on in Trading Up, the next novel by Candace Bushnell. She is a celebrity now, a well-known Victoria’s Secret model. And yet again, she has to put up with a lot of shit from men around, because she is still not taken as seriously as she would like to. Her ultimate purpose in life is to climb socially. She wants to be invited to the most glamorous parties in Manhattan, to befriend the most influential people, to get into the most selected circles, and of course, to find a rich man who would provide for her. So she would do anything to have it all. She befriends the socialite Mimi Kilroy, the queen of the social scene in Manhattan, but their friendship is far from sincere. She manages to get a rich man and become his wife – MovieTime president Selden Rose. Finally, she got a man who would take care of her, at least so to speak. But the two of them have nothing in common. Their marriage is fake and lacking love. Janey admits to herself that a marriage like hers is nothing else but a luxury prostitution. They fight all the time. Rose gets mad every time Janey tries to show other people how smart she is, when in fact he thinks she is utterly stupid.

Fake marriages are commonly present in Candace Bushnell’s books, just like insecure women characters who are unable to do anything smart in their life like graduate from a good school or find a decent job, and who want men to pay for their rent. Candace Bushnell is not afraid to put her finger on these specifics of Manhattan behavior. She is very sincere and straightforward about Sugar Daddy’s girlfriends and their phony marriages.

Things take a bad turn for Janey when Comstock Dibble reveals the specifics of their past relationship to the press (including the money he had given her), and suddenly Janey becomes the social leper. Tabloid papers, and then everybody else, call her the model prostitute. She tries to bring herself back on track after such a social disaster, but to no avail. Selden Rose is blackmailed to divorce her, as “he can’t handle women like Janey Wilcox”. Once Janey finds out about her husband’s perspectives, she flies away to Los Angeles to start a new life. And eventually she manages to do just that – she gets her second chance in L.A.

Candace Bushnell’s books are sharp and outrageous, so their happy endings don’t really sound like a cliché. It wasn’t surprising for me that Janey got well in the end. It would have been surprising the other way. Too much is too much, isn’t it? After all she has been through, Janey Wilcox finally finds her way, all by herself. See, didn’t even need a man for that. You can do it, baby.

The next story from Four Blondes is the story of Winnie and James Deeke, both journalists. Another fake marriage. They have nothing in common, they don’t understand each other, they even doubt they love each other anymore. They are very competitive. They can’t talk to each other about their marital issues (or about any issues, for that matter), because their marriage is lacking any sort of communication whatsoever. Sometimes they feel about each other like they are two strangers. Their marriage is nothing else but a social bargain. Why on earth would two people marry just for the social convenience’s sake? It’s not for a foreseeable future like a business, it’s for a lifetime. How are you going to live with a man happily ever after, if the only reason you married him (and took his name) is you expected to become the wife of a famous writer? And if he doesn’t become a famous writer, what then?

Meet Cecelia Kelly Luxenstein, the socialite, and her husband Hubert Luxenstein, the European prince. Yet another fake marriage. Yet another social bargain. Nothing special, nothing romantic, nothing lovely is going on between Prince and Princess Luxenstein. And because of that, Cecelia is depressed, anorexic, almost addicted to drugs, incapable of bringing herself together, intolerant to fame and Page Six (God knows nobody would like the kind of Page Six fame), seeing a shrink who seems unable to help her.

The funniest scene in this story is the scene when right after their marriage, Cecelia asks for money from her husband to buy new clothes, and her husband makes his point to tell her that she’s got a full closet of clothes, and that marrying him has never meant receiving money for clothes.

Although they have been together for four years and married for two, Princess Cecelia realizes they have nothing in common, she knows nothing about her husband, they act like two strangers, they always fight, they are literally from Mars and Venus. Why did they get married again?

The last Blonde from the book is a writer from New York who realizes there are no eligible men in Manhattan anymore. New York is so rotten, it became impossible to get a decent relationship here. So she flies to London, in search for true love, and maybe a husband. But what she discovers, is not what she expected to discover at all. Sex habits of London people are very different from those of New York people, and not in a good way, aka not in a way which would make an American woman happy. So she goes back to New York and meets her love on the plane; and then she realizes that the grass is not greener on the other side of Atlantic after all.
Published by Victoria West la 20:40